Remember how my last blog tailed off into two parts? Well, it happened again. But this is it now, the final piece.  The end. That is until the next blog anyway, which hopefully makes it through in one piece next time. So here’s the remaining short stories that Jamie and I manage to find ourselves in. Enjoy.

The only place to have a drink in the sleepy town of Akko is the Jam Bar, down on the sea front. It’s only open on Thursdays and Saturdays, so we really have to plan ahead if we want to go out. It’s a great little non-profit venue run by volunteers from a local Kibbutz, showing a wide range of shows; from indigenous Israeli dance performances to David Bowie and Metallica cover bands. Thursday evening, we headed down to see a Led Zeppelin and Deep Purple cover band.

The show was amazing, and by the time it was drawing to a close, coupled with Jamie and I having had a couple of beers, we fancied dancing. Dares were sent back and forth between us to get up and start off the trend, but neither of us take it up. Luckily, the lead singer instructs everyone to get up and dance for the last and most famous song. So up we get, and naturally head straight down to the front, touching distance to the stage. As the last final few lines are belted out, the mic is passed down the front, and makes its way along to Jamie and me for some impromptu and always safe crowd participation. What could possibly go wrong?

I yell to the frontman that Jamie knows the lyrics, pointing at my unsuspecting and recently betrayed friend. It soon becomes clear that Jamie does not know the lyrics, becoming apparent through an awkward silence. It backfires spectacularly and the mic is handed across to me.

Now, smoke on the water is one of those songs that you know, more specifically the guitar riff, yet the lyrics elude you. Luckily, a kind gentleman next to us grabs it and belts the appropriate lyrics through the sound system. Jamie and I sing along either side in an indecipherable yet in tune, mutter. You know the kind, when you’re expected to sing along yet don’t know the words, so just make general similar noises?  Suddenly, we become the lead singers at a Deep Purple cover band in a tiny town in Israel. A surreal moment that will stay with me for a long time.

One of the places we visit during our stay here is the Western Galilee College, in which we have a partnership with. A contact of ours had told us that we could get cheap massages from students studying there, so thinking this would be a nice way to relax after a week of coaching, we took them up on the offer.

Jamie and I arrived in good time, but couldn’t find anyone masseuse-looking. So we sat in what we assumed was the waiting area, and after about 40 minutes, a burly lady arrives to ask who’s going first. I stepped up to the plate, and entered first. Now, I’ve had a few massages in my time, and have a pretty good grasp on the general etiquette and procedure, so I can assure you what you’re about to read is not how it should go:

Shortly after entering the room, there is a brief and confusing conversation about sheets and towels. We had been told to bring our own towels for some reason, so that probably confused proceedings even more. After agreeing on what type of massage, what I’m going to lay down on and receiving a glass of water, it begins.

Everything is going well, with the usual pleasantries and questions exchanged. These are however, brought to an abrupt end as the masseuse halts formalities and states “Oh… You make me big problem”. After thinking for a few seconds unsure of how to reply, I ask how exactly a stationary and motionless me was creating a problem.

She responds by explaining that she has got the timings wrong, and only has 20 minutes left, in which to fit Jamie in too. I offer to leave so Jamie can come in, but the masseuse has a change of tune, and reveals there is a plan and that it’s all sorted.And so it continues, but this time in silence. The massage is intermittent, with almost tangible pensive-pauses from the masseuse. I can hear the cogs turning in an internal monologue battle, one in which she was clearly losing. So after around the fourth pause, I offer to leave, which she agrees will make things easier.

So I get dressed in record time, and vacate the room so Jamie could enter for what is now surely going to be more of a drive-through massage. Upon exiting the room, I’m met with the flustered masseuse, an unexplained short man and an equally confused-looking Jamie. A conversation ensues, in which the end result is I return to the room to continue, and Jamie is to receive a massage from the short man, who it also turns out is the receptionist.

Back into the room I go, undress and back on the couch. Whilst I’m awaiting her return, I reach for my water and take a sip. I take a sip from what was once my water, but now had been replaced with a cup of massage oil. Sometimes it’s just not your day!

I eventually make it out of the room alive and wait for Jamie, who returns with a story of misfortune of his own. The receptionist had ordered him to get undressed, and then decided to stay present and watch. This was then followed by a poorly mistimed role on the couch coupled with an underwear malfunction.

We aim to pay and leave, although cannot find anyone. Jamie manages to spot the receptionist-come-masseuse through the window of the room he had the massage, and asks where we pay. He points at me. “You want me to pay him?” Jamie responds pointing at me. The man nods in agreeance, adding further confusion to everything. Jamie and I decide to slip off out the door, me with oil in my belly and Jamie having received a treatment from someone he probably shouldn’t have. We contemplated asking them to phone a taxi for us, but thought better of it and embarked on our journey home to discuss exactly what had just happened.

One Wednesday Jamie and I walked down the road from our school for lunch, visiting the only shop close by. A standard, very tiny shop run by a diminutive and friendly man named Victor. When we asked if they had any sandwiches, Victor promptly whipped out a couple of chairs, brought in a table from outside, and sat us down. After a short discussion, Victor’s friend disappears on some sort of errand. Victor lays down a piece of cardboard as a dining cloth, with condiments following shortly afterwards: humus, a tomato sauce and a selection of bread all come out. His friend then returns, with a couple of hot dogs to add to the impromptu feast. Where he got these from is anyone’s guess, as they certainly didn’t come from the shop.

Whilst Jamie and I are dining, a couple of customers come and go, completing their shopping around us. A few of them even stop to have a short conversation with us, yet nothing is asked as to why we are sat in a shop having dinner for two.

After we finish, we pay and thank Victor for his kind custom, and a truly unique experience.

Over the weeks, during introductions to sessions, my name has sometimes been met with a few giggles from the kids. I never really thought much about it, until one day several kids were calling out a phrase that was unfamiliar to me.Trying to relate it to the limited Hebrew I knew, I had no luck. Fortunately we had a student with us that day that spoke the mother tongue, and explained that they were saying “Rest in peace”. Naturally I asked why they were calling this out to me, which he replied “Because Matt, it means dead”. Turns out I’m dead in Hebrew.

This vignette is essentially just about balls going where you don’t want them to. Coaching 6 hours a day, week-in week-out, you’re bound to lose a few footballs.

On one occasion at Eshkol, the kids were sat on the playground, receiving a talk from a teacher. I got a little bored, so turned and kicked a ball at the wall to pass the time. It didn’t however, reach its desired spot. Instead, it took a different and wayward path, which was that of a path straight towards a mug, which was up until then, invisible to me. It smashed, loudly. I pivoted slowly in the hope of avoiding attention, but no good. All eyes were on me, in particular a very wide disbelieving pair that happened to belong to Jamie, accompanied with a hysterical grin. I’ve had a few unfortunate events with cups and lights so far, maybe Jamie will delve into that at some point…

The next incident takes place at Wiezman School, whilst monitoring a girl’s match; the ball was kicked over the fence and into the road. A man passing by with a child in arm offers to kick it back over.  The passer-by takes aim, and kicks the ball. The trajectory is promising, offering adequate height. The aim however, is unfortunately off, and subsequently ends up lodged in between two cables high up on a telephone pole. It was as good as gone. There’s a brief and hopeful respite in time as we wait to see if the ball will drop back down. But this is a post about things going wrong and chaotic endings, so of course it was stuck, bringing the match to a premature end. We had added a piece of our story to the history of this already aged and archaic town.

Till this day, and for many days to come I’m sure, should you find yourself walking along the streets of Akko, you shall forever see one of our footballs high up on Ben Ami Street. 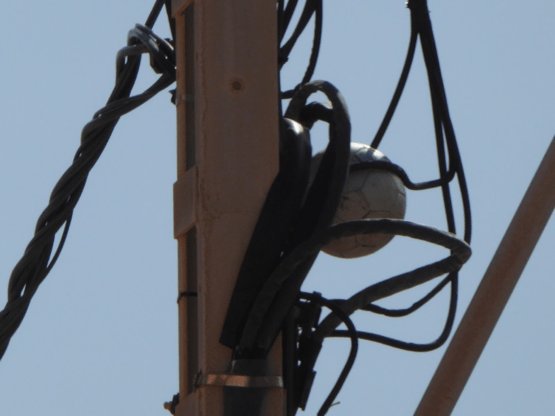